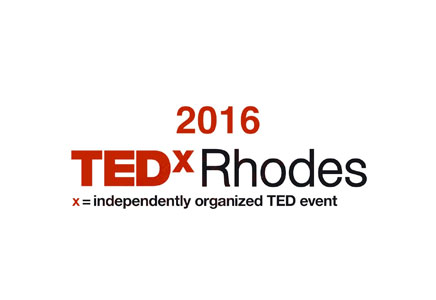 Since the theme of this year’s TEDx is “Values Worth Spreading», today we will talk about values. The highest and most eternal values, ​​which govern mankind today, such as the ecumenical peace, the friendship and the cooperation among people.

And just because we live in Rhodes, in the Mediterranean, at the crossroads of three continents, we must see how we can explore ways of disseminating “light”  from this suffering part of the world, in order to inspire hope to the expectations of all future generations.

At this point, I would like to approach the subject through the noblest, in my humble view, project that could be attempted, which is the “Revival of the Ancient Wonder of the Colossus”, recounting if I may, and employing in chronological order, my personal experience and contribution.

We are in year 1999 approaching the new millennium. A milestone date, when the submission of a proposal for the creation of a memorial millennium project was made, which was ideologically inspired by the ancient wonder of the Colossus.

The aim of the project at this particular juncture that signaled the New Millennium, was to draw the attention of all humanity to our island, not purely motivated by a feeling of irredentism, but by creating a memorable cultural contribution of Rhodes, which would also be used as a Center of disseminating the diachronic ideals of Greek civilization throughout the world.

Let’s now take a look at what this particular proposal is composed of, starting from its ideological content, which constitutes the epitome of all these values that will contain.

The Colossus is the eternal myth of Rhodes, which is attempted to be revived, but not altered by the re-creation of a sterile and anachronistic copy (replica) carrying with it any archaeological implications.

The philosophy and ambition of the project is to become an evolutionary ideological continuation of the ancient monument, which was dedicated to the Sun god of Helios, freedom and peace, to gain nationwide character and to be presented as the Greek seal of the human centered and diachronic ideals of universal peace, friendship and the brotherhood of people, with a view to become a world landmark and a remarkable reference point.

Therefore, the vision of the project is shaped as follows:

“Just like the ancient Colossus was built as a tribute to the Sun God Helios, to freedom and peace, its future successor standing (in the Mediterranean) at the crossroads of three continents, aspires to become a global symbol of world peace and peoples’ friendship and through the iconic emission of its eternal light to the human ideas and deeds, to establish Rhodes as a worldwide beacon by disseminating messages of hope and optimism to the expectations of all future generations.”

How all these will be translated into practice?

The conception of the project should be based on the construction of a contemporary creation with artistic expression and dimensions of innovative technical achievement, of visual angle of a 21st century feat, respecting inextricably the measure, the harmony, the historic and culturally rich architectural environment of Rhodes.

This work should result from the outcome of an open global competition that will be approved by a local and international selection committee which will be composed of prominent figures from the world of politics, culture, literature, arts, sciences and technology and will be placed under the aegis of the President of the Republic in order to ensure the international prestige and the absolute transparency in procedures.

Where will the financial funds and resources be found, especially in a period of acute economic crisis?

In the quest of financial resources it is proposed that the project be self-financed through the mobilization of prominent personalities (Ambassadors of the Idea) who would lead the conduction of an International Fundraising Campaign and would raise funds from sources such as:

What must be avoided at any cost?

We must therefore, at any cost, avoid any kind of commercialization of the idea of the project, and therefore it is proposed that money from future project revenues be reinvested in the direction of the promotion of Peace and of our cultural heritage by creating:

Let us be inspired a little to find the best examples:

To avoid ambiguity, I would like at this point to mention only a few examples of landmarks that added prestige and admiration in the cities – countries that have attempted to create them:

and many other miraculous wonders that have offered significant added value, wherever they have been constructed.

It would be though, a great omission nowadays not to include the establishment of:

To make the overall effort sound and sustainable for the future generations of young scientists, it is proposed that a significant share of project revenues  be attributed to the establishment of an Archaeological Research Center for the Colossus and its history but also an Academic Chair of Colossus that will aid in the research and study of archaeologists – researchers on issues related to the possible location or future findings of the ancient wonder according to the  new scientific standards  and methods.

What will though be the ultimate challenge for the project in the future?

The ultimate challenge of this undertaking is the establishment of the idea, in the long run, that Rhodes can internationally claim the reputation of a “Neutral Island of Peace”, “a dispute resolution Davos” in the Mediterranean (which has incurred due to the acute refugee crisis) and through the semiological implementation of the project of the Revival of the Colossus to maximize all ancillary but highly significant benefits and rewards.

Rhodes, with its multicultural identity and prominent strategic location, constitutes the ideal venue to bridge cultures and ideas, to establish free dialogue and promote the universal and diachronic ideals of world peace and friendship amongst people and countries.

An undertaking of this caliber will be able to offer multiple benefits for Greece at tourism, cultural, economic, social, national and diplomatic levels and will be deemed worthy of sending a message to the international community of the country’s dynamic presence in international developments, confirming thus the current evolutionary perspective of the Greek civilization.

It concerns one of the most valuable elements of our national identity, our intangible cultural heritage, our history, our mythology and our legends.

It requires great care in handling its implementation without damaging our history or our culture but prove that we are their worthy successors.

At this point we therefore request:

We request the contribution of every Rhodian, of every Greek, of any citizen around this world is feeling filos (friendly) towards the Greek ideals, to realize our vision:

To offer Rhodes, Greece, Europe, the Mediterranean, as well as the rest of the world a landmark-feat for the 21st century.

A global seal of the universal values ​​of peace, unity and cooperation among people, which will perpetually emit light and hope to the expectations and the inspirations of the future generations to come.