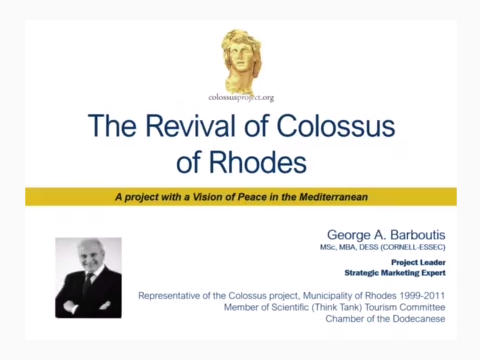 A Brief Summary of the Project

The idea concerns the creative revival of this ancient wonder in a modern, contemporary work-of-art that will bring out the invaluable and intangible characteristics and convey the symbolic values of the legendary monument.

The main source of inspiration comes from the 21st century re-visitation of the ancient wonder aimed at embodying the diachronic values of (world peace, friendship and cooperation) and at becoming an iconic project of Greek culture invested with an ecumenical ideological content.

The ultimate vision of the project is to promote Greek cultural heritage and to re-establish Rhodes and Greece as a tourism, cultural and diplomatic destination of international caliber.

The Revived Colossus of Rhodes aspires to become an Architectural Landmark, a Cultural Achievement of our century, as well as, a neutral Venue of Peace, at the crossroads of three continents. By engaging people, communities and leadership motivated by a common vision the destination can be led into a marvelous evolution.