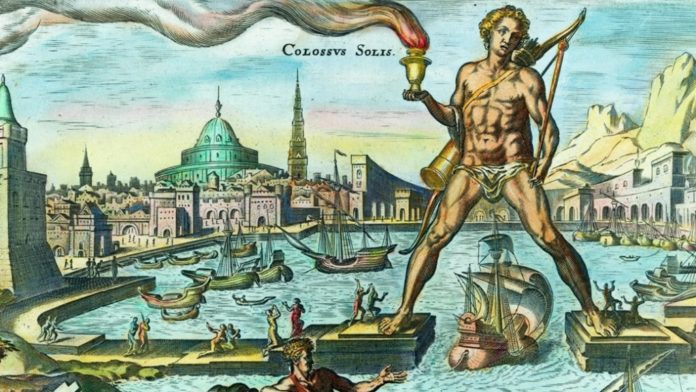 In its 2400year history, the greek island of Rhodes built a reputation as a powerful cultural, scientific and commercial center of the Mediterranean bridging continents, empires and worldviews. To name just a few of noted moments in history, Rhodes was the place of a well-known rhetoric academy frequented by Cicero and Julius Caesar, it was the place where the famous Antikythera Mechanism was created, and where philosopher Kleovoulos, one of the 7 Sages of antiquity was famously quoted teaching the dictum “Μέτρον Άριστον” (Excellence comes via Moderation). Perhaps most famous of all, Rhodes was the city that at 280 BC erected the perennial Colossus, a 33 meter statue of the Greek titan-god of the sun Helios and one of the Seven Wonders of the Ancient World. The statue symbolised freedom and independence and marked a lengthy time of peace in the region.

Today, at a time where concepts such as peace and international collaboration often appear lost in translation, a team of Rhodians headed by George Barboutis, pioneer of the millennium initiative of the Revival of Colossus, believe the time has come for Colossus’ revival at its original location.

What is the main premise behind The Colossus project?

The Colossus of Rhodes, one the seven wonders of the ancient world, is the eternal legend of the island of Rhodes which ought to be creatively revived avoiding any intention of reconstructing a sterile replica of the mythical statue bearing with it any anachronistic or archaeological implications. The philosophy and ambition behind this project is to create a 21st century contemporary feat of human accomplishment, inspired by the ancient wonder which will constitute an evolutionary and ideological continuation of the ancient statue, dedicated to Sun God Helios, borrowing only the unique intangible attributes, the unparalleled symbolic characteristics and artistic values of the legendary monument. It will be a modern achievement and a world landmark for Greece but also the wider region. It will also symbolize the values of Greek cultural heritage and promote the perpetual and diachronic ideals of peace, freedom and friendship among people and countries.

What vision lies at the center of such project?

Just like the Colossus, built as a tribute to the Sun God Helios, to freedom and peace, its future successor standing in the Mediterranean, at the crossroads of three continents, will constitute Rhodes’ tribute to the world symbolizing world peace. Its eternal light sending messages of hope and optimism to future generations.

Assuming the vast complexity of such undertaking, what would be your approach in dealing with the challenges of funding and construction?

To give substance to this new landmark, a call for an open international architects’ competition is proposed to secure artistic excellence and innovative technological capability of global recognition. An Honorary Selection Committee must be formed consisting of prominent figures from the world of politics, culture, literature, arts, sciences and technology, who will be placed under the aegis of the President of the Hellenic Republic in order to acquire worldwide acknowledgment, international acceptance and transparency in all procedures.

A significant amount of funds could be secured by contributions made by the Municipal and Peripheral Authorities, international organizations, the European Commission and UNESCO; also through contacting Greek and international prominent figures; in this respect Hellenes of Diaspora and philhellenes could become ambassadors of the idea and lead an International Fund-raising campaign.

How would you avoid sterile commercialization of such a vast project?

Following the example of the revival of the Alexandria Library and avoiding any kind of commercialization, future project revenues will be reinvested in promoting Greek cultural legacy as well as the idea of global peace. This could be achieved by creating a theme museum of the Colossus and by establishing an International Center of Peace, which may host a cultural multiplex, including a conference center, exhibition spaces, auditorium, concert hall, also hosting major fairs and peace events.

How would you engage Greek and International youth?

To make the effort sustainable for the future generations of young scientists in the field of Archaeology, it is proposed that a significant share of project revenues be attributed to the establishment of an Archaeological Research Center for the Colossus and its history, which would aid the studies of archaeologists and researchers on issues related to possible location or future historical findings of the ancient wonder based on new scientific methods.

What is the biggest challenge for the project amid growing geopolitical tensions in the region all the while at a time of austerity?

The ultimate challenge of the project and this visionary noble goal is to consolidate the belief among people that Rhodes deserves to claim, in the long run, the Chair of the “Neutral Island of Peace” in the Mediterranean region and through the successful completion of this ambitious undertaking, the Revival of the Colossus, to maximize all eminent benefits and rewards. Rhodes, with its multicultural identity and prominent strategic location, is the ideal venue to bridge cultures and ideas, to establish free dialogue and promote the universal and diachronic ideals of world peace and friendship amongst people and countries. Such a project has the potential to offer a multitude of long term sustainable rewards on both cultural and socioeconomic levels, especially during this period of crisis, instability and hardship.